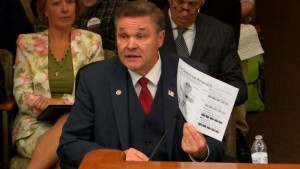 St. Paul, Minn. (KARE) — Legislators in Minnesota have introduced their own “bathroom bill” similar to others that have recently come under fire for discriminating against the LGBT community.

The bill was met with support and scorn at a hearing of the House Civil Law and Data Practices Committee Tuesday.

The Republican-sponsored bill would limit the use of bathrooms in public facilities to persons’ biological gender.

“My bill is based on an objective standard, something we can all agree on,” said Rep. Glenn Gruenhagen). “It is not based on feelings.”

“This is not a good bill,” responded Rep. Barb Yarusso, mother of a transgender son. “Representative Gruenhagen claims that he has got objective standards, but there is no such thing in this bill. He says a person’s sex is either male or female. That is not actually strictly true.”