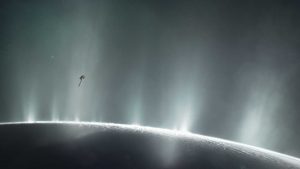 This illustration shows Cassini diving through the Enceladus plume in 2015. New ocean world discoveries from Cassini and Hubble will help inform future exploration and the broader search for life beyond Earth.
Credits: NASA/JPL-Caltech

CAPE CANAVERAL, Fla. – One scientist says NASA is closer than ever to identifying a celestial body that might be hospitable to life

Images of Saturn’s moon Enceladus were taken by Nasa’s Cassini spacecraft. They indicate hydrogen is pouring into an underground ocean, which can start a chemical reaction key to life on earth.

Both findings were published in scientific papers and journals on Thursday.

The discoveries may increase scientific interest in the celestial bodies in our solar system that contain water.