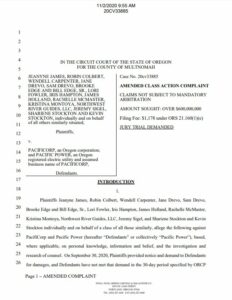 MEDFORD, Ore. —  Four Labor Day weekend fires last year are being blamed on equipment owned by PacifiCorp, the parent company of Pacific Power. That is according to a private fire investigator in a class action lawsuit. The suit was filed in October last year, but just this week a legal filing included the investigator’s report.

The Labor Day weekend fires upended thousands of people’s lives, burning more than a million acres across the state, destroying thousands of homes and killing nine. Now we know the fires were fueled by high winds, but a class action lawsuit is blaming PacifiCorp for resulting damage because the company didn’t turn off it’s power lines during the wind storm.

“At one point, it was just completely blinding smoke as thick as you can imagine going through the highway. There’s curves on that highway, so I was just looking for that yellow divider line,” said Preston Wamsley, remembering his evacuation just days after the fire sparked in 2020. It is a hauntingly familiar story about escaping the licks of wildfire at the last moment.

The South Obenchain fire is just one of four being blamed on Portland based company PacifiCorp. The fire investigator hired for the lawsuit found PacifiCorp’s electrical equipment likely caused or contributed to the spread of the Echo Mountain fire east of Lincoln City, the South Obenchain and the 242 fires in southern Oregon and the Santiam Canyon fires east of Salem. However, the Oregon Department of Forestry lists the South Obenchain’s cause as “under investigation.”

Last month, an ODF fire investigator told us the review process passes through the district forester and then heads up to Salem. “It’s a process and we want to make sure that as we go through the processes, and that the details and accuracy of the investigation is the priority,” said Dave Larsen. He is the southern Oregon area director for ODF.

Lawyers are asking the Multnomah Circuit Court to certify a class of people who were harmed by those fires so they may one day be awarded damages in the case. The hired investigator says in her report, she didn’t have full access to all public reports and that a full, detailed examination of the fires will still be required to identify specific causes. But she says she’s confident while weather contributed, it did not spark the fire.

We reached out to PacifiCorp for comment, they have not gotten back to us. An ODF spokeswoman in Salem told us no one was available to speak about the fire investigation on Friday.