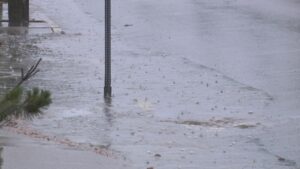 MEDFORD, Ore. — Rain is expected in the coming days, but crews NBC5 News spoke with say it won’t have a significant impact on their firefighting.

The incident management team for the Slater and Devil Fires say it’s a common misconception to think rain automatically puts a fire out.

They say only a substantial amount of rain can do that, especially in these dry conditions.

Having too much rain too quickly, can also pose a hazard to crews and surrounding communities causing erosion and mudslides.

“The rain penetrates immediately to the ground and the ash itself creates a barrier and the rain will, instead of soaking in the soil, will run off the soil really quick and run off the ash really quick,” said Mike Granger, Northern Rockies Incident Management team.

Granger says only a small amount of rain is expected in the forecast for the fires about two tenths of an inch.

He says it will calm things down on the fire lines, bring flame lengths down, and last a day or so allowing crews to make some progress.

However, they do expect that progress to be short-lived as more dry weather is on the way.