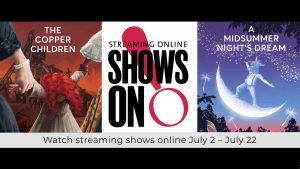 ASHLAND, Ore. – With the cancellation of in-person live performances this year, the Oregon Shakespeare Festival is trying something new.

OSF said the decision to cancel came on the heels of Governor Kate Brown’s announcement where she stated large gatherings, including live performances, will not be able to return to normal until at least the end of September.

On July 1, OSF announced an alternative to in-person performances. The festival will launch a new online streaming service featuring full-length video performances of OSF plays from the 2020 season lineup, called “Shows on O!”

For now, the service is considered a pilot program, with two shows available. However, OSF hopes to bring more content in the months and years to come. The price is $15 per-show, which is good for 48 hours of viewing.

If you would like to help OSF performers during this pandemic, you can visit https://www.osfashland.org/en/support/dare-to-dream.aspx