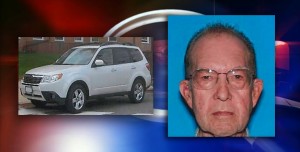 Siskiyou County, Calif. – Police are searching for a man reported missing from his Etna, California residence.

According to the Siskiyou County Sheriff’s Office, 87-year-old Emmett Mackey left his home in his vehicle and drove to an unknown destination on March 28th. He was last seen driving his white 2009 white Subaru Forester, with California plate numbers “6ENT363”.

If you have any information as to the current whereabouts of Emmett Mackey, please contact the Siskiyou County Sheriff’s Office at 503-841-2900.