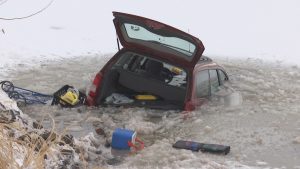 The westbound driver apparently drifted into a snow bank, and went into the lake.

The driver’s name has not been released, she was the only person in the vehicle.

She was taken to Sky Lakes Medical Center for treatment of minor injuries.