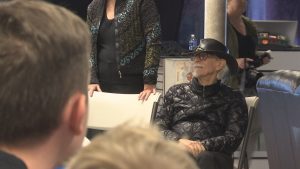 MEDFORD, Ore.– The original designer of some of the Star Wars franchises most iconic space ships was in the Rogue Valley this weekend for a meet-and-greet tour with fans.

Colin Cantwell may not be as recognizable as George Lucas but he was one of the first people Lucas tapped to be a part of Star Wars in its infancy. During his time working with Lucas, he developed models of the X-Wing, the Death Star, Star Destroyers and even a model of the Millenium Falcon but that was never fully used.

On Saturday, Cantwell met with fans in Grants Pass at Iguana Comics and Sunday had another discussion at Astral Game in downtown Medford. Viewers were treated to a descriptive background of Cantwell’s time in the industry and work on developing the ships. He’s credited with creating unique designs that allowed audiences to differentiate between the heroes and the villains.

While Cantwell is well-known for his contributions to Star Wars he also has spent time working with NASA, fed Walter Cronkite information during the Apollo 11 moon landing, and helped with  implementing the now-infamous theme song for “2001: A Space Odyssey.”