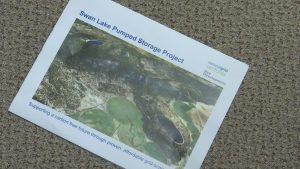 Klamath Falls, Ore. – The half billion dollar Swan Lake Pumped Storage project will be getting a tax break from Klamath County.

Instead of paying property taxes, developers will pay the county ‘Community Service Fees’ totaling more than 20 million dollars over a 15 year period.

“Overall, the developer pays much less in taxes.”  Explains Commissioner Derrick DeGroot.  “But the community actually benefits greater.  And that’s the way we’ve structured their program.”

The Swan Lake hydro project would serve as a huge storage battery, moving water between two reservoirs to release electrical power during times of peak usage.

Rye Development hopes to begin construction on the project in December of 2021, with completion in late 2025.