Klamath County, Ore. – A prescribed burn is now underway on more than 300 acres of forest between Medford and Klamath Falls.

“We are located between the Odessa Campground and Highway 140, between Klamath Falls and Rocky Point.”  Explains Heather Berg of the Klamath Ranger District.

About a half a square mile of forest will be treated over the next several days.

“To reduce hazardous fuels, and to eventually reduce fire risk in this area.”  Notes Berg.

“And also just put fire back into the landscape.”  Adds Eric Krueger of the Klamath Ranger District.

Krueger says conditions are ideal to accomplish those goals.  “We’ve been targeting for probably over 10 years now – this is more of a maintenance burn.”

Fire crews will cross the highway to the south later this week.

“We will, and plan to burn through the weekend.”  Explains Krueger.  “We have units on the other side of the road.”

Those traveling along Highway 140 should expect smoke, and limited visibility during the burn.

“We do ask folks to be very careful.”  Says Heather Berg.  “Aware of the smoke conditions, and aware of potential firefighters on the roadside.”

Over 3 dozen firefighters are working on the ‘Raccoon’ prescribed burn. 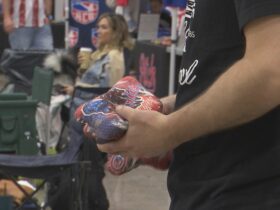