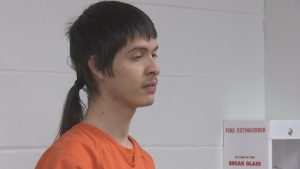 Klamath Falls, Ore. – A Klamath Falls man was arraigned Thursday afternoon on charges of murder, unlawful use of a weapon, and tampering with evidence.

Uriah Vargas is accused of killing Melina Ghost on Wednesday of last week by stabbing her in the neck.

Vargas was indicted by a grand jury Wednesday.

A ‘not guilty’ plea was entered Thursday in court.

“Mr. Vargas is appointed an attorney.”  Explains Klamath County District Attorney Eve Costello, adding:  “Traditionally with these kinds of crimes, say with a murder, it takes about a year or so to get to a negotiation, or to trial.”

Police say Vargas went home after the murder and tried to hide the weapon and clothing he was wearing during the crime.