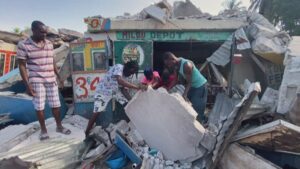 The region could see even more damage this week, with Tropical Depression Grace bringing the potential for heavy rain, flooding and landslides.

Monday morning, people are tearing through the rubble to find any signs of life after the monstrous 7.2 magnitude earthquake on Saturday devastated southwest Haiti.

Families who lost their homes are now sleeping on nearby soccer fields.

Hospitals already pushed to the brink by the COVID pandemic are forced to set up triage centers outside.

People in desperate need of aid are being evacuated by air to Port-Au-Prince.

An international effort to help is now underway.

The US is sending a 65-person search and rescue team from Virginia at the request of the Haitian government.

The US Coast Guard is also helping airlift the injured.

This is the latest devastation for a country that has never fully recovered from an earthquake in 2010 that killed as many as 300,000 people.

Haiti is also already dealing with political chaos sparked by the brazen assassination of its president last month.

It’s yet another blow to a country in crisis.