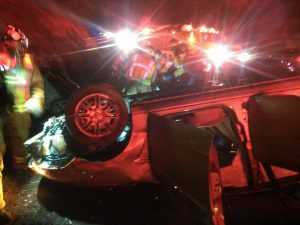 When crews arrived on-scene, they found a single vehicle on its top in the roadway, with the driver trapped inside. Crews worked quickly to free the driver, who was transported to Three Rivers Medical Center with moderate injuries.

According to Rural Metro Fire, the driver became combative during treatment, so firefighters were sent in the ambulance to assist.