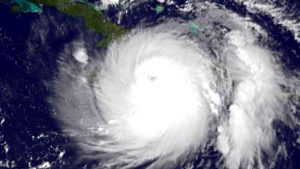 The hurricane is now being blamed for at least three deaths as it continues to churn toward the East Coast.

Florida would be first.  The current forecast is for a glancing blow, but the path could also shift bringing the massive system even closer.  The entire state is under an emergency order.

“The destruction could be catastrophic and everyone needs to be prepared,” says Governor Rick Scott.

Preparations in South Carolina now include evacuations.  More than a million residents along the coast have been told to leave by Wednesday.

“These storm surges are not to be messed with, so when you live on the coast please heed caution and follow through with the evacuations that we ask you to do,” Governor Nikki Haley urged late Tuesday.