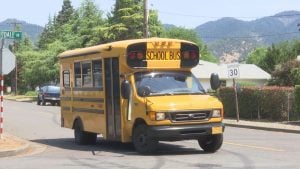 Social media was quick to spread word of the altercation and potential physical contact by the bus driver causing some parents to rush to the location on Frankham Drive and Cloverlawn Drive where the bus had parked to pick up their kids.

According to the Josephine County Sheriff’s Office, the bus driver, who was driving students from Fruitdale Elementary, was not found to have touched any students and had done everything he was supposed to do. Both the sheriff’s office and the Three Rivers School District reviewed tapes of the incident and found that the bus driver followed protocol and it was actually several student’s on the bus that were causing trouble.

“In fact, it was very specific to the behavior of a couple students that started the whole situation,” said Superintendent Dave Valenzuela. “We’re working with the students today and their families.”

Valenzuela declined to specify what the students were doing but described their actions as extreme. Apparently the bus driver was a substitute and as such, some students tried to benefit from that.

“More extreme than a typical substitute issue where students try to take advantage of a substitute situation,” said Valenzuela. “The behavior that I reviewed on the videotapes was fairly extreme and of great concern.”

The Three Rivers School District will be continuing an internal investigation into the matter and will be discussing more with the juveniles and their families about taking possible alternate routes to school from here on out.

The sheriff’s office ultimately found no criminal wrongdoing by the bus driver and want to remind the public to screen their social media more closely and verify information.