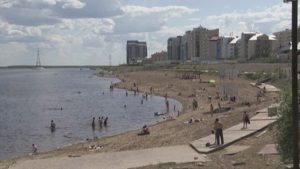 VERKHOYANSK, Russia (NBC) – Temperatures are soaring across the United States, but elsewhere, one unexpected area that is also suffering a heatwave is the Russian region of Siberia in the Arctic Circle. Temperatures there have been hitting over 100°F in recent weeks, and it’s causing a lot of problems.

It certainly has been a strange summer for the citizens of Verkhoyansk in Siberia. The town is about 400 miles further north than Anchorage, Alaska to give you an idea of how remote and far north it is. But this heatwave is not only hitting them there, above the Arctic Circle, it’s taking place across the entire region, and it has been going on for several months now.

It’s worth noting that the World Meteorological Association said that may of this year was the hottest May on record and climate scientists, in general, have said that the Arctic region is warming at a faster pace than the rest of the world.

Now we’re really, really seeing the impacts of that in Russia this summer.

Just last month, melting permafrost in a different part of Siberia whittled away at the foundations of a large diesel fuel storage tank in Siberia, causing it to collapse, spilling 20,000 tons of diesel fuel into the Arctic wild. It’s one of Russia’s largest-ever fuel spills, and they’re still struggling to clean it up.

But for sure, the most disturbing trend we are seeing this year from these heat waves is the wildfire spread.

Every year, Russia, especially in Siberia, sees wildfires, but this heatwave is actually driving them at a faster pace this year, at about five times their normal levels.

The good news, however, is that Russia’s Forestry Ministry said that we may now be at the peak of the wildfire spread.

But it’s still only July, and it’s still not clear when this historic heatwave is going to break.