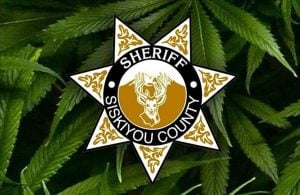 Siskiyou County Ordinances 15-18 and 15-19 ban outdoor medical marijuana grows on private property. The amendments allow only 12 plants to be grown in a compliant indoor structure or greenhouse.

In a press release, Sheriff Jon Lopey said in part, “SIMIT’s objective is to curtail the numerous illegal marijuana grow sites on private property in various parts of unincorporated Siskiyou County. We are not targeting compliant, legitimate medical marijuana users who are in possession of an amount of marijuana consistent with their prescribed medical needs.”

Additional information about code compliance can be found at http://www.co.siskiyou.ca.us/content/planning-division-medical-marijuana-cultivation