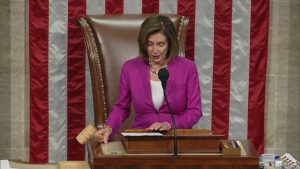 WASHINGTON, D.C. (NBC) – After weeks of delay, lawmakers are moving forward with transferring impeachment to the Senate for trial.

On Tuesday, the House of Representatives ends a three-week delay turning over impeachment to the Senate.

Voting begins this week to send the charges, or articles, and decide who will try the case.

House Speaker Nancy Pelosi held off for three weeks trying to force the Senate to call witnesses. That is still undecided.

Four Republicans are likely to vote with Democrats to make that happen. Republican senator from Utah Senator Mitt Romney said, “I’ll be voting in favor of considering witnesses. Including John Bolton. Yes. He’s someone who I would like to hear from.”

President Trump is urging the Senate to dismiss the charges with no trial. Democrats call that a cover-up.

Republicans want a quick trial which will now likely begin next week.