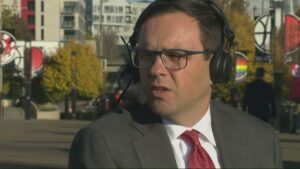 In a statement released after Haynes’ report, McGowan confirmed that he has resigned from the team. “After careful consideration over the summer, I have decided to resign from my position as President and CEO of the Portland Trail Blazers Organization effective November 26, 2021,” McGowan said in the statement.

Jason Quick of The Athletic reported that McGowan was in the final year of his contract, which was set to expire in June 2022.

Hankins has been with the Trail Blazers for nine seasons. He spent the past two seasons as the chief commercial officer and executive vice president for the team.

“Since joining the Trail Blazers in 2013, Dewayne has been crucial to our success and growth,” team owner Jody Allen said in a statement. “Now in his ninth season with us, we’re thrilled to have him lead the organization.”