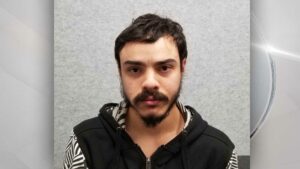 GRANTS PASS, Ore. – A local man was arrested for allegedly stabbing another man numerous times during an altercation in Grants Pass.

Police said on the night of March 9, officers were told about a “physical disturbance” at an apartment in the 1200 block of Willow Lane.

While responding to the call, dispatchers were told about a man with multiple stab wounds about a block away. Officers said they later determined the man was stabbed while at the Willow Lane apartment.

The stabbing victim was taken to the hospital with non-life-threatening injuries.

About 20 minutes after the first call came in, police arrested a suspect, identified as 25-year-old Julian Sommer Smith, a resident of Grants Pass.

“In the course of the investigation,” the Grants Pass Department of Public Safety said, “it was determined the victim and suspect were acquaintances at the time of the incident and had been drinking. There was an altercation inside the residence, during which Smith stabbed the victim more than 15 times with a fixed-blade knife. The victim was able to walk to a friend’s residence nearby for help.”

Smith was charged with second-degree assault and unlawful use of a weapon. He remains behind bars in the Josephine County Jail.