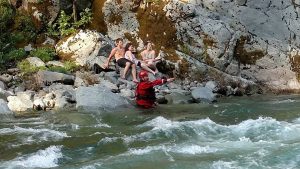 They became stranded on the rugged bank of the Smith River after they lost their floatation devices in the swift water.

Del Norte County Search and Rescue crews worked with the U.S. Coast Guard to hoist the teens into a USCG helicopter.

They were transported to Sutter Coast Hospital for evaluation.