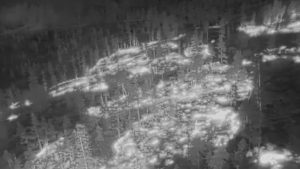 ASHLAND, Ore. — The city of Ashland is looking to pilot a new program that could help firefighters during wildfires.

The city is considering getting an infrared drone. It can detect heat to tell firefighters where a fire is most active especially in hard to reach areas.

The drone would also crack down on illegal camping around Ashland forests on city-owned lands.

“Just nine years ago we lost 11 houses in a wildfire in Ashland and we know how vulnerable we are,”  said Chris Chambers, Wildfire Division Chief with Ashland Fire & Rescue. “This is just another tool in the toolbox in order to enforce an existing ordinance about camping and use of fire but in a more innovative way.”

Chambers said the infrared drone would only be used on city-owned lands and would not infringe on private properties.

Chambers said the program is just an idea at this point and will have more details on the project come mid-July.