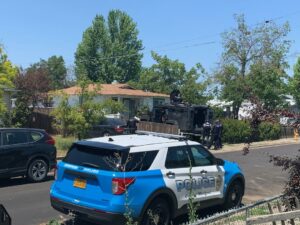 MEDFORD, Ore. – An arrest was made after a standoff in a Medford neighborhood.

Officers said at about 11:15 a.m. Tuesday, they responded to a domestic disturbance call in the 800 block of Narregan Street.

When police arrived at the residence in question, a possibly-armed suspect wouldn’t cooperate and was acting “highly irrational” as officers attempted negotiations.

Eventually, Medford police forced their way inside the home and the suspect was arrested.

There were no reported injuries other than the female victim who was hurt in the initial assault. She was not taken to the hospital.

The suspect was identified as 45-year-old Mac McClintick. He was charged with coercion, assault, and interfering with police.