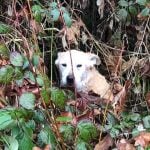 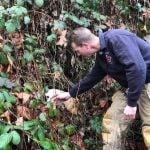 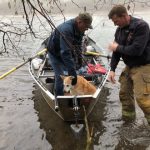 GRANTS PASS, Ore. – Most southern Oregonians know the hazards of blackberry brambles. The near-impenetrable thickets of trailing, prickly stems can tear through most clothing. Recently, “Sadie” the dog learned the hard way how difficult the brambles can be.

The Grants Pass Department of Public said Sadie went over a steep riverbank in the 900 block of West Park Street. The 16-year-old yellow lab was stuck, exhausted but otherwise okay.

Firefighters responded to the area to assist. Using a rope system, they rescued Sadie from the blackberries. She was loaded up on a drift boat and taken to land. A city parks employee tended to Sadie until her owners could pick her up.

Firefighters thanked the private boater who took his time to help with the rescue that brought Sadie back to her family.