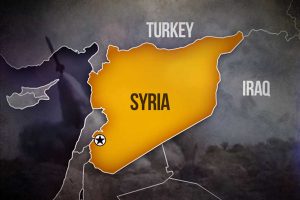 (CNN) — A US service member was killed in northern Syria Thursday from wounds sustained in a blast from an improvised explosive device, according to the US-led coalition fighting ISIS.

This marks the first time a US service member has been killed inside Syria since a small number of US Special Forces were sent there last year to advise and assist Syrian forces battling ISIS, also known as ISIL.

It is customary for the US military to wait at least 24 hours before identifying casualties to allow for next of kin notification.

The incident occurred in the vicinity of Ayn Issa, some 30 miles north of ISIS’s self-declared capital of Raqaa. Defense Secretary Ash Carter and other top defense officials have said operations to retake the city from ISIS would begin in the near term, as the battle against ISIS in its Iraqi stronghold of Mosul is already underway.

An estimated 300 US Special Forces are currently operating in Syria advising the Syrian Democratic Forces, which is made up of a number of local militias, including the Kurdish YPG.

Beyond the death Thursday, four US service members have been killed in Iraq since military options to dislodge ISIS from both countries began in 2014.

“I am deeply saddened by the news on this Thanksgiving Day that one of our brave service members has been killed in Syria while protecting us from the evil” of ISIS, Carter said in a separate statement Thursday.

“It is a painful reminder of the dangers our men and women in uniform face around the world to keep us safe,” he said.