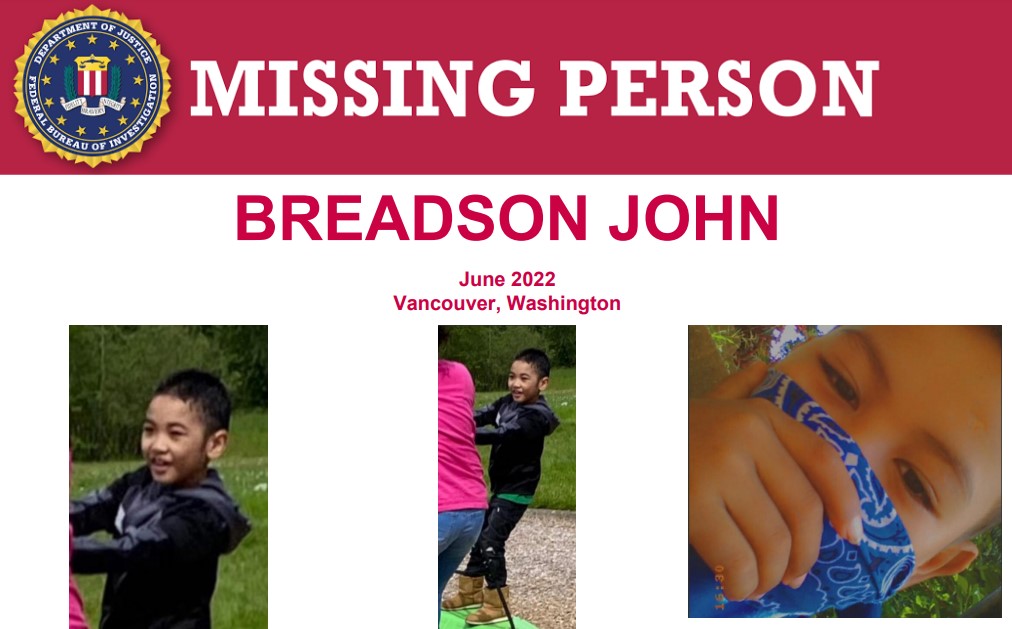 VANCOUVER, Wash. (KGW) — The Federal Bureau of Investigation is involved in the search for a boy from Vancouver, Washington who has been missing since at least June of 2022.

The FBI Most Wanted account tweeted on Monday morning about the case of Breadson John, also known by the name “Brxsan.” He would be 8 years old as of this release.

Though the federal agency posted about John’s disappearance Monday, the last known development in the case was more than seven months ago.

On June 17, 2022, the FBI said, detectives from the Vancouver Police Department attempted to conduct a welfare check at John’s home after receiving reports concerned about him from the community. The detectives were unable to locate John at the time.

In a follow-up statement, Vancouver police said that detectives have attempted to contact members of John’s family to see if he was with anyone else or remains missing.

“To date, the family members that have been contacted have not provided investigators information related to the whereabouts of Breadson and he has not been located,” the agency said.

John was born Oct. 17, 2014 in Hawaii. He’s described as being of Pacific Islander descent with black hair and brown eyes. Photos provided by the FBI are more than a year old, the agency said, so his appearance is likely to have changed.

John speaks English and Trukese/Chuukese. He has ties to Hawaii, Arizona, Washington and the Truk/Chuuk Islands in the Federated States of Micronesia.

The FBI released limited details about the circumstances of John’s disappearance and it’s unclear if he could be with an adult. However, he appears under the “Kidnappings/Missing Persons” category of the FBI’s Most Wanted web page, not under “Parental Kidnappings.”

It’s also unclear if there were any previous efforts to distribute information about John’s disappearance to the media.

Anyone with information about the case is asked to contact their local FBI office, the nearest American Embassy or Consulate, or submit a tip online at tips.fbi.gov.