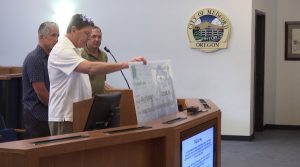 Medford, Ore. — More than 700 kids will be able to participate in youth programs thanks to the Medford Parks and Recreation foundation.

The foundation presented a check of more than $20,000 dollars to the city council Thursday afternoon. The money was gathered through fundraisers and will allow kids who can’t afford programs to take part.

“They really touch a lot of lives throughout our city, and they do a lot of good work including after school kinds of things,” Mayor Gary Wheeler says, “it’s really a wonderful program.”