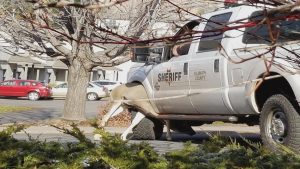 Klamath Falls, Ore. – A aggressive deer was threatening and attacking cars in Klamath Falls over the weekend.

911 started getting calls of an aggressive deer on Glenridge Way at around 9:30 Saturday morning.

“There was a call that this buck was attacking vehicles,” said neighbor Donna Ross. “So the Sheriff came up, and I guess the buck started attacking the Sheriff’s pickup.”

The deer got so mad, he somehow managed to get his antlers caught in the wheel well of the patrol truck.

Donna Ross was told to keep a safe distance. “So I snuck behind a bush, and I got some video, and I was absolutely captivated the way this buck was completely lodged in a wheel well.”

The deer’s behavior raised concerns that it might not be well, and a fish and wildlife specialist was called in.

“They had decided to tranquilize it would be the best thing, and remove it,” recalled Ross. “And I guess assess the health of it – and it turns out it was just rut, that’s what everybody thought.”

Due to the aggressive nature of the deer, a wildlife biologist confirmed that the deer unfortunately had to be euthanized.

While it’s best to just stay out of the way, you should call for help if there’s a threat to public safety.