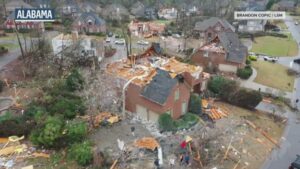 (NBC) – At least five people have been killed after a line of severe weather swept through the south.

The deadly storms spawned tornadoes that cut a path of destruction for 150 miles as it moved across Mississippi, Alabama and Georgia.

Major highways and schools were closed for safety, and thousands are still without power.

In Alabama, the outbreak turned deadly with at least five people killed after more than sixteen unconfirmed tornadoes hopscotched through the state. At least one long-track twister stayed on the ground for more than 20 miles.

South of Birmingham, in hard-hit Pelham, officials urged people who had come out to examine the damage in their neighborhood to get back in basements as quickly as possible.

Some waited it out in a local middle school turned evacuation center.

Pelham resident Ginger Sims didn’t comprehend what was happening until it was actually happening. “Everything started shaking and rattling,” she said. “I went running to the bathtub, covered myself up and it then it just passed over. it came as quickly as it left.”

For those in the direct path, the damage was devastating. Dreams were destroyed. Old trees were toppled.

74-year-old James Dunnoway was lying in his second-floor bed when the tornado took direct aim. He said, “I ignored the warning and I shouldn’t have. I’m lucky to be here.”

Across the street, his neighbor, Trish Partridge, hid downstairs with her husband. She’s sad for what she lost, but also grateful to be alive.

Dunnoway said since 1982 he has been hit now by three tornadoes. He will not, he said, rebuild again.