Pig On The Loose 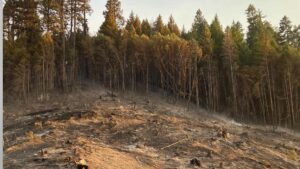 JACKSON COUNTY, Ore. – Progress is being made containing a small wildfire that started in rural Jackson County.

Crews responded to the Board Mountain Fire northeast of Trail off Highway 227 Tuesday night.

Initially, a 20 person crew arrived at the scene while fire activity was minimal. The situation was monitored overnight as more resources arrived.

By Wednesday morning, over 170 personnel were assigned to the fire, which was estimated to be about 36 acres in size and 75% lined.

Thursday morning, the Oregon Department of Forestry said there was no longer any active fire on the landscape as crews focus on mop-up efforts.

While the cause of the Board Mountain Fire remains under investigation, industrial activity has been ruled out.

No homes were threatened and no evacuation notices were in effect.