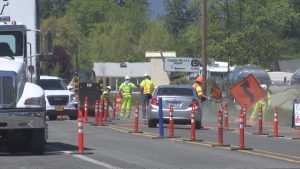 TALENT, Ore.– Single lanes of traffic going both ways on Highway 99 has created some congestion between Talent and Ashland as a project to put in sidewalks continues.

Local businesses are split on how it’s been affecting them. Some say they’re doing fine while others say it’s sometimes tough for their customers to reach them.

“It is hit and miss obviously with blockades in front of the business, people have a hard time coming in,” said Ryan Miles, owner of Miles Automotive.

Miles says for the most part though, his business has been doing fine. But he says other businesses are worried about the loss of parking spaces due to the expansion of sidewalks.

“You know, one more summer of tough sales on the 99 and customers being angry at traffic is going to be a tough one to swallow,” said Andrew Robison, general manager of Talent Health Club. “But I think we’ll be OK.”

Robison says he can’t wait to see the final project. He understands the construction right now is making it hard for customers to get in and out and the traffic can be overbearing, but it’s hopefully all for a good cause.

“Like many other businesses, we’ve got a little bit of worry in the back of our minds hoping that all the good foot traffic isn’t diverted off the 99 this summer,” he said. “We have real good hopes for what’s gonna go on in Talent once this is all completed.”