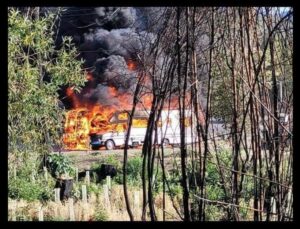 TALENT, Ore. – A potential disaster was averted with the help of California firefighters.

On the evening of Monday, July 19, firefighters were told about a smoking vehicle that was not currently threatening structures on West Valley View Road in Talent.

However, when crews arrived at the scene, they found the vehicle fully engulfed in flames in an area near the burn scar of the Almeda Fire, close to buildings that were spared from the 2020 fire.

Because it was reported as simply smoking, firefighters didn’t respond in full force. But the ones who were at the scene immediately went to work putting out the flames.

According to Jackson County Fire District #5, a strike team from Los Angeles that happened to be area acted on their own and responded to the incident.

Firefighters credited the strike team for keeping the fire inside the mobile home park and saving nearby buildings.

“The community was spared another tragedy by the bravery of individuals who took the substantial risk to do the right thing,” said Jackson County Fire Chief Charles Hanley. “On more than one occasion you have heard me say that we need three things to put out these fires, ‘water supply, mitigation and weight of attack.’ This time we had it. We kept the fire small and protected life and structures.”

Hanley offered his thanks to the Oregon Office State Fire Marshal, Representative Pam Marsh, and Senator Jeff Golden for their support.