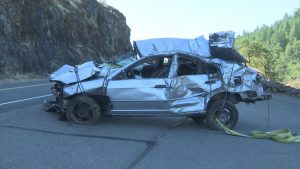 Merlin, Ore. — Investigators continue to look for answers surrounding a deadly crash in Hellgate Canyon. It happened just after midnight on Saturday, June 16.  According to Oregon State Police, 21-year-old Hailee Fox called 911 to say she was driving 24-year-old Rodrigo Herrera to the hospital for injuries from an unknown altercation. As officers were responding to Galice Road, they found Herrera lying in the street and found Fox’s car had driven off the road into the canyon.

Friday morning, crews removed the vehicle that has been there for nearly two weeks.

“It was airborne for a little ways and then cartwheeled its way down to the river’s edge,” said Vince Randall, BLM Forest Manager.

Fox did not survive the crash.

Friday, the Honda involved in the crash was retrieved using a helicopter.

“The car is not in good shape,” Randall said.

BLM said the car became a hazard for the river.

“Kids climbing onto the car because it was just above the water,” Randall said.

A memorial created by Fox’s loved ones marks where the car drove off Galice Road, knocked through the rock wall, and down into the canyon. Investigators are still trying to figure out why Fox’s car went off the road, but the BLM said a federal highway project is already in the works to make Galice Road safer.

“To put guardrails all along this side of the river,” Randall said.

There are also plans to add more signage for drivers.

“Catch someone’s eyes to notify them of whatever the riffles are,” Randall said.

With 4th of July next week, BLM is reminding everyone to stay safe on the road.

“Please, we want everyone to have a great holiday vacation experience and to go home when it’s over. And not have me in front of a camera talking about an extraction process,” Randall said.

Officials said they don’t have a concrete timeline yet, on when we can start to see guardrails and new signage. They said it will be soon.