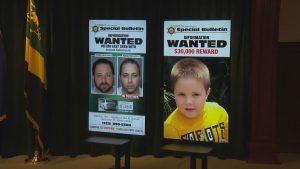 Baldwin Park, Calif. (KCAL/CNN Newsource) – A young boy’s mother is heartbroken and his father is in police custody, awaiting extradition from Nevada to California.

Police arrested his father for murder.

At the Baldwin Park home of his maternal grandparents, hope has greatly diminished for the safe return of 5-year-old Aramazd Andressian, Junior–known as Piqui to his family.

His mother released a statement through the lead detective in the investigation that started out as a missing child search and is now a murder case.

Detective Louie Aguilera with the Los Angeles County Sheriff’s Department said, “My heart is shattered. I cannot imagine emptiness and the void i will bear until we are together again someday.”

On Friday, the L.A. County Sheriff’s Department, along with police in Las Vegas, arrested the boy’s father, Aramazd Andressian Senior, for murder.

His latest booking photo is very different from what he looked like when his son first disappeared.

Detectives believe they know why, saying, “He was making plans to flee the country.”

Andressian Senior was supposed to drop off Piqui with his mom on April 22nd because they had split custody following a bitter divorce, which detectives say was the motive for murder.

After Aramazd Junior’s disappearance, Ana Estevez fanned across southern California to hand out flyers to help find her son.

Detectives said his father spent 47 days in Las Vegas. “He was socializing in Vegas.”

Back in Baldwin Park, neighbors said they haven’t seen Piqui’s mother or his maternal grandparents much here. But they’re constantly reminded of his sweet face.

Neighbor Fidel Cervantez said, “We feel bad they did this to the mother.”

The prosecutor in the case said a body hadn’t been found, but that circumstantial evidence has led to successful prosecutions in similar cases.