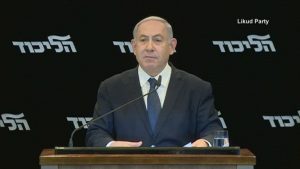 TEL AVIV, Israel (NBC) – Benjamin Netanyahu, Israel’s prime minister for 12 years, appears to be on the verge of being unseated. Opposition leaders there have finalized a deal to seize control.

Thursday morning, there was a stunning political defeat for Israeli Prime Minister Benjamin Netanyahu, sure to affect the U.S.-Israel relationship.

The longest-serving prime minister in Israeli history, who had a strong alliance with President Trump and a more fraught relationship with Democratic presidents, is being pushed out.

His one-time defense minister, right-wing nationalist politician Naftali Bennett, was seen smiling side by side with an Arab party leader Monsour Abbas last night. The two are joining forces, a first in Israel, to create an opposition coalition to replace Netanyahu.

Negotiations went down to the final hour, confirmed in a late-night phone call and email.

The remarkable alliance comes two weeks into a fragile ceasefire with Hamas following the worst violence between Israeli Arabs and Jews in years.

Netanyahu’s likely replacement, Naftali Bennet, is the son of American immigrants, a tech tycoon who has taken a hard line against a potential Palestinian state.

Netanyahu’s political base is still strong, known as the “comeback king” here, he could still break the coalition apart.

Netanyahu tweeted Thursday, calling this coalition a dangerous left-wing government. He will try in the coming days to convince some of these politicians to drop out of the coalition. The Israeli parliament still has to vote on the deal that could happen as early as next week.