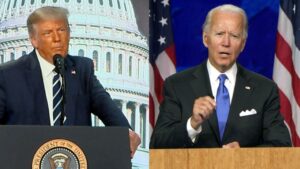 (NBC News) Democrats looking to build on momentum after the final night of their national convention ended in fireworks both literal and figurative.

“The current president has cloaked America in darkness for much too long,” Mr. Biden said, adding “United we can and will overcome this season of darkness in America.”

The Republican National Convention kicks off on Monday.

At the White House Friday, glimpses of the stage being set for his acceptance speech on Thursday could be seen.

Previewing his message, President Trump offered some dark imagery of his own.

“I’m the only one standing between the American dream and total anarchy,” he said.

“While I’ll be a Democratic candidate. I will be an American president,” Mr. Biden promised.