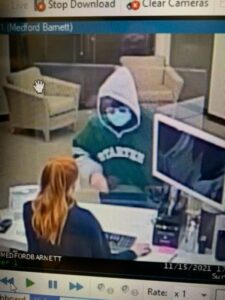 MPD says at 5:26 p.m., a man robbed the First Interstate Bank at 2646 E Barnett Road. Police say the suspect did not display a weapon and demanded cash. He then fled with an undisclosed amount.

During this time, Asante went on lockdown as a precaution.

No injuries were reported and the suspect is still on the loose. MPD says he is described as a white male, unknown age, wearing a green shirt with the words “STARTER” in white lettering. His face was covered and he was wearing sunglasses. If anyone sees someone matching the description in the area, call the dispatch center: 541-770-4783

NBC5 News was the only news station at the scene, and will continue to provide updated information.