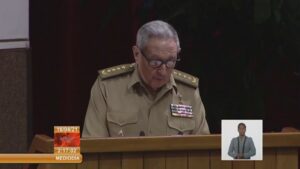 HAVANA, Cuba (NBC) – Cuba’s Raul Castro announced he is resigning as head of the island nation’s Communist Party, ending an era of formal leadership by him and his brother Fidel Castro that began with the country’s 1959 revolution.

Castro made the announcement in a speech at the opening of the Eighth Congress of the ruling Communist Party.

The 89-year-old Castro didn’t say who he would endorse as his successor as the first secretary-general of the Communist Party but had previously indicated that he favors yielding control to Miguel Diaz-Canel, who succeeded him as president in 2018 and is the standard-bearer of a younger generation of loyalists who have been pushing an economic opening without touching Cuba’s one-party system.

His retirement means that for the first time in more than six decades Cubans won’t be led by a member of the Castro family.

The change in leadership of the party comes as Cuba confronts its worst economic crisis in decades, driven by the coronavirus pandemic and sanctions imposed in the waning days of the administration of former President Donald Trump.