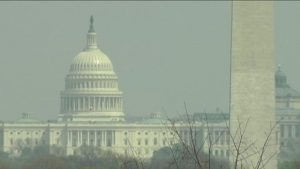 WASHINGTON, D.C. (WRC) – The U.S. House of Representatives will vote next week on the issue of Washington, D.C. statehood.

The statehood bill would admit Washington, D.C. to the United States as the 51st state.

It’s a bill that is grabbing new attention following the Trump administration’s use of federal agencies to police the streets of the district during Black Lives Matter protests sparked by the death of George Floyd.

During a news conference, both local and federal leaders said those actions brought attention to the district and its campaign for statehood.

House Majority Leader Steny Hoyer (D-MD) said, “If D.C. were a state, it could not be shortchanged as it was under the Cares act And its residents would be protected from the kinds of civil rights violations we saw in Lafayette Square, all for the purpose of a photo op. This is not just an issue of local governance and fairness it is a civil rights issue as well.”

“We know that statehood is the only way to ensure that we have full representation,” Mayor Muriel Bowser said. “That we have votes here in the United States of America and the capitol but also to make sure that we are fully autonomous and that is our birthright and that is what this bill will ensure.”

The D.C. statehood vote will be held on the House floor on June 26th.