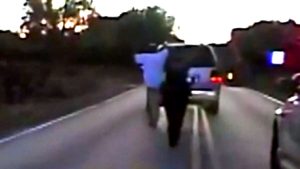 Tulsa, Okla. (KJRH) — The family of shooting victim Terence Crutcher are demanding justice and talking about what they see in the videos released by Tulsa, Oklahoma police Monday.

The images speak volumes, including the aerial view from the police helicopter showing Crutcher walking away from Officer Betty Shelby – with his hands up.

Attorneys representing the Crutcher family say they are heartbroken by the video.

“We understand he might have not obeyed a command of the police– that doesn’t justify lethal force just because someone is not obeying an officer.,” said Attorney David Riggs.