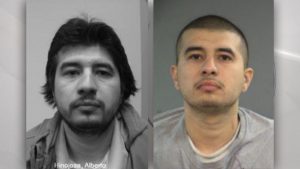 MEDFORD, Ore. – The Federal Bureau of Investigation is trying to find a wanted man from Medford.

The FBI said on April 4, 2016, Alberto Hinojosa pleaded guilty to possession with intent to distribute 50 or more grams of methamphetamine.

Before he could be sentenced, Hinojosa left the area for a planned trip to Las Vegas. He did not return.

On May 4, 2017, a federal grand jury indicted him for failure to appear. Now, the FBI is working to track Hinojosa down.

He’s described as a white/Hispanic man with brown eyes, black hair, 5’11” tall, weighing 180 pounds with scars on his right calf and right finger.

Hinojosa last known address was in Medford. He has family connections in Stockton, California. He may also have ties to the Bakersfield, California area.

Anyone with information about Hinojosa’s current whereabouts is asked to call the FBI’s Medford office at 541-773-2942 or submit a tip at http://tips.fbi.gov.