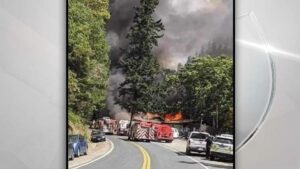 JOSEPHINE COUNTY, Ore. – A major fire is being reported at the Galice Resort.

A structure fire at the resort along the Rogue River was first reported at about 10:30 a.m. Tuesday.

Numerous structures were reportedly involved and multiple spot fires were seen in the surrounding woods. Two air tankers and one helicopter were dispatched to the area to help firefighters on the ground.

By 1:20 p.m., firefighters said the resort was fully involved, but the spot fires were out.

Less than an hour later, the resort’s restaurant and store were burned to the ground. Some items, like rafts, were salvaged. Rental cabins were not damaged.

The cause of the fire remains under investigation and the owners of the resort declined to be interviewed.

Rural Metro Fire, Grants Pass Fire and Rescue, the Oregon Department of Forestry, and the Wolf Creek Rural Fire Protection District were all involved in the response.