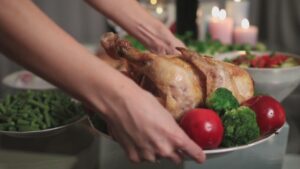 MEDFORD, Ore. — Thanksgiving is Thursday and with any family holiday, comes stress.

NBC5 News spoke with a local psychologist about some ways to cope.

With a divisive election and global pandemic, Ashland psychologist Dr. Douglas Col says it’s no secret this year has been especially hard on all of us.

He says it’s best to make an agreement with family members not to discuss politics at all.

But if that doesn’t work and arguments start, he says to make an excuse to get some fresh air and take a walk or wash some dishes in the kitchen.

He says to try not to engage.

“And the reason for that is because the situations are so grave right now,” said Dr. Col. “That so many people are getting thrown into denial and you can’t argue against denial it’s like an delusion. It’s useless to try and you just make things worse.”

Don’t try to win or convince someone else of your point of view because there won’t be a winner.

He says setting boundaries works, but you have to stick with them.