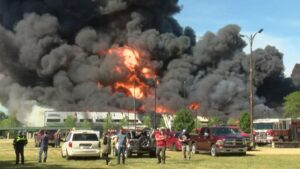 ROCKTON, Ill (WREX/NBC) – Dozens of crews are on the scene of a massive fire at a chemical plant in Rockton, Illinois.

The four-alarm fire broke out at around 7:00 a.m. Monday at the Chemtool manufacturing plant.

A full-scale evacuation is underway within a mile of the facility, which includes a high school.

Huge plumes of thick, black smoke can be seen for at least 25 miles away as flames continue to erupt.

There is no word on injuries.