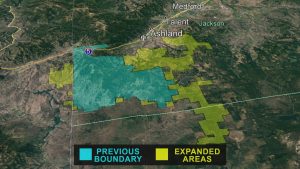 WASHINGTON, D.C. – Secretary of the Interior Ryan Zinke announced his recommendations for modifying the boundaries of the Cascade-Siskiyou National Monument.

The monument in southern Oregon was first established by a Presidential Proclamation in June of 2000. It consisted of about 52,000 acres before being expanded nearly 48,000 acres by then-President Obama in January 0f 2017.

According to Zinke’s report, the monument was first established to protect the biodiversity of the region. The expansion was reportedly made to “buffer” the biodiversity first outlined in the original proclamation.

Furthermore, 30% of lands within the monument is privately owned. Zinke said a president doesn’t have the authority over private lands. He added much of the private land covered by the 2000 monument designation was bought up by the federal government after grazing rights were suspended.

According to Zinke’s report, a “substantial number of acres” within the Cascade-Siskiyou National Monument are designated as Oregon and California Revested (O&C) Lands. O&C Lands are specifically and permanently set aside for the purposes related to timber production. Concerns have been raised about a president’s legal authority to declare a national monument on O&C lands.

Zinke hasn’t yet sat down with President Donald Trump do discuss specific adjustments to the Cascade-Siskiyou National Monument. Instead, he said his first steps will be working with the Department of Justice to decide whether the national monument designation and expansion were legal to begin with.

Zinke said the national monument proclamation should be amended to better fit with the Antiquities Act’s original intent. The boundaries should also be adjusted to address impacts to public lands and use. He’s fairly sure the president will follow his recommendations.