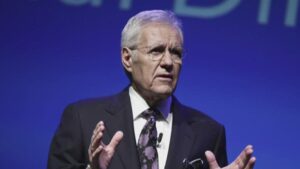 Trebek was synonymous with the quiz show that called itself “America’s favorite.” The show won him a loyal audience worldwide, with and without his once-trademark mustache.

When Trebek first hit the Jeopardy! stage in 1984, he already was a successful on-air host. His career began on radio close to home in Canada. He moved to television, hosting a bi-lingual quiz show for students after a stint in news and special events. But the Ontario native with a degree in philosophy found a niche in game shows.

He eventually set the Guinness record for “the most game show episodes by the same host.”

Among his many honors; five Emmy awards for hosting and his native country’s second-highest civilian honor, the Order of Canada.

Trebek lived most of his adult life in Los Angeles, where he and his second wife, Jean, raised two children.

Between tapings in the Jeopardy! studio, a relaxed Trebek often talked with the audience.

Trebek had some serious health scares including brain surgery in 2018 after suffering a fall. Then, in the middle of Jeopardy’s 35th season, Trebek announced he had been diagnosed with stage four pancreatic cancer, saying he planned to beat the low odds for survival.

He said, “I have to because, under the terms of my contract, I have to host Jeopardy! for three more years.”

Trebek had already thought about his replacement. “It’s probably going to be a woman,” he said. “It’ll be somebody younger, somebody bright, somebody personable.”

As the man with all the answers, through a record-breaking career, Alex Trebek was, without question, one of TV’s most enduring personalities.

Jeopardy! announced that episodes Trebek taped will continue to air through Christmas Day, saying his last day in the studio was October 29th. The show has not named a replacement.