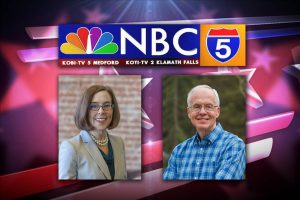 Medford, Ore.- Five gubernatorial debates were announced Thursday. They will be held in Bend, Portland, Eugene and Medford. The Medford debate is set for Thursday, Oct. 13 and will be sponsored by KOBI-TV and KOTI-TV.

Oregon will hold a special election for governor on Nov. 8, 2016. The winner will serve the remainder of former Governor John Kitzhaber’s term, which expires in January, 2019.

The special election was prompted by former Governor Kitzhaber’s resignation in February, 2015 following an ethics scandal.

Brown is seeking election to the remainder of Kitzhaber’s term and defeated four challengers in the Democratic primary election. Physician Bud Pierce defeated three candidates to win the Republican nomination to challenge Brown in November.