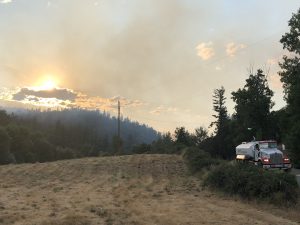 By 9 p.m., crews fully lined and were mopping up the Yale West Fire within the complex. Its size is estimated to be about one acre.

At that time, crews were still working on the Little Applegate Fire which sits at about 10 acres. ODF believes spot fires did start around that fire though they were quickly suppressed.

These fires were the first naturally caused of the season but with the slow start, it’s been easier to handle.

The Jackson County Sheriff’s Office has evacuated one home and three others are under Level One ‘Be Ready’ notices. No word if those have been dropped as of Sunday night.