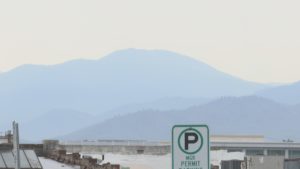 MEDFORD, Ore.– Thunderstorms this weekend started several small fires around the region. Crews have managed to hold all of them but as another potential storm rolls on Monday night, forest agencies are gearing up for more.

Things were relatively quiet on Sunday but crews across the region are gearing up for the potential for dry lightning this week.  Several lightning strikes Sunday night started a handful of small fires across southern Oregon.

The Rogue-River Siskiyou National Forest is wrapping up a small fire near Applegate Lake called the Carberry Fire. Oregon Department of Forestry says it was putting out two small fires less than a third of an acre.

“It didn’t cause us any unusual grief by any means,” said Brian Ballou, spokesperson for ODF.

ODF is currently monitoring for any smoke with high-quality cameras placed on mountaintops around the region. It can monitor up to 100 fires at a time. With this capability, forest agencies are looking to the next storm.

“The weather forecast for this afternoon going into the evening could bring a stronger storm,” said Ballou.

It’s left to be seen what will happen. ODF says vegetation is in a prime condition to spark with ease. However, fingers are crossed this next storm could bring a good amount of moisture along with the lightning.

The only thing forest agencies don’t want to do is get complacent about a so-far mild fire season.

“It just takes one storm and your whole summer and most of your fall is just shut and that could happen at any time here,” said Ballou.

Forest agencies say there is a possibility there may be a fire from lightning strikes that have already occurred. However, they will have to wait for those to start smoking to know where they’re located.