Ashland, Ore. — An Ashland woman has been arrested after allegedly burglarizing a home.

Ashland Police say they received a report of suspicious activity inside a home, where the owners were not home, on the 300 block of Grant Street.

Police found 27-year-old Chelana Hill hiding in the bathroom and saw the home had been burglarized.

Hill was lodged in the Jackson County Jail on several charges including burglary, criminal trespassing, and theft. 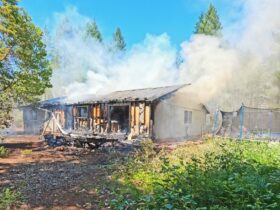